No Widgets found in the Sidebar Alt!

No Widgets found in the Sidebar Alt!

I tried to run the following code, but it turns out that it was a bit late. I forgot to download the corpora.

The MyCommand.elo.data_txt(book) is returning the actual txt saved in db. The actual text saved here is Leviathan, by Thomas Hobbes (1651), the introduction chapter.
But the cmd yield was: 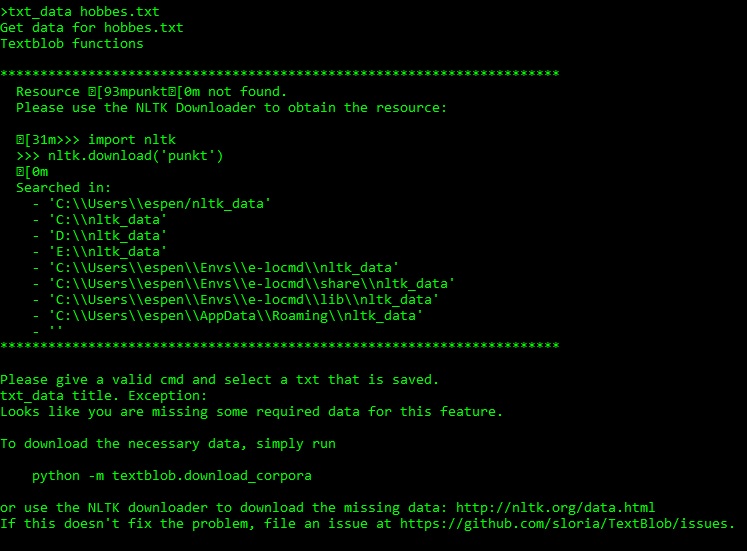 I download the nltk corpora to the env:
(e-locmd) C:\Users\espen\virtualEnvs\e-locmd\app>python -m textblob.download_corpora
Ready to move on.
Tokenization
Tokenization refers to dividing text or a sentence into a sequence of tokens, which roughly correspond to “words”. This is one of the basic tasks of NLP.
blob = TextBlob(MyCommand.elo.data_txt(book))
# print(blob.sentences)
for x in range(len(blob.sentences)):
print(blob.sentences[x] +”\n”)
The output here is sentence + newline to separate them all.

Here you see some of the result for code:
for word in blob.sentences[0].words: print(word)
Noun Phrase Extraction
Since we extracted the words in the previous section, instead of that we can just extract out the noun phrases from the textblob.
Noun Phrase extraction is particularly important when you want to analyze the “who” in a sentence.
(Substantiv:Fellesnavn er ord du kan sette artiklene en, ei eller et foran)
Lets extract the noun from the introduction:
noun = []
for np in blob.noun_phrases:
noun.append(np)
tu = (name, blob, noun)

Here you can see a list (not perfect) of nouns, remember we are woking with machines. So this has to be worked on, but it gives an image of nouns in the text.
There are some duplicates here, we can remove those with a set. Sets are unordered collections of distinct objects.
tmp = MyCommand.elo.data_txt(book)
name = tmp[0]
note = tmp[1]
noun = tmp[2]
print(len(noun))
s = set(noun)
print(len(s))